In light of the recent rumors, it is important to understand why James Harden’s reported treatment of Kevin Durant could be a concerning red flag for Joel Embiid. 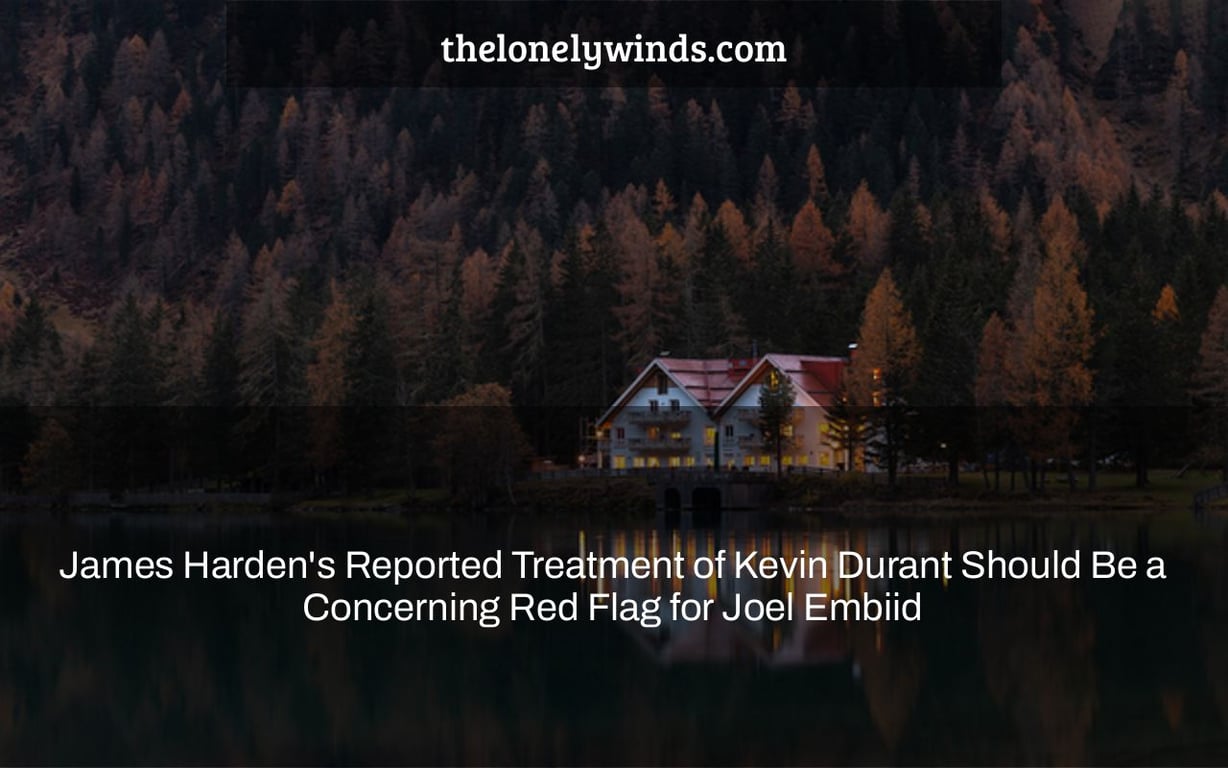 Last year, the Brooklyn Nets’ new super squad seemed to have a chance to rule the NBA for years to come.

However, James Harden made it clear that this would not be the case.

Harden effectively pushed his way out of Brooklyn and was traded to the Philadelphia 76ers after playing in 89 total games (regular season and playoffs) over two seasons with the Nets.

The Beard, on the other hand, had broken his vow with this action. He allegedly betrayed his pledge to Kevin Durant.

James Harden’s time with Kevin Durant and the Brooklyn Nets ended in disappointment.

The reasons for James Harden’s departure from the Nets looked to be several. When Kevin Durant was injured this season, he had to bear the burden at times. Kyrie Irving’s unwillingness to acquire the COVID-19 vaccination added to the frustration, considering that he was out for the first two months of the year and only played part-time after he returned.

Regardless of who was to blame for Harden’s decision to depart, his tenure with the Nets can be summed up in one word: failure.

Last season, the Brooklyn Nets acquired the three-time scoring champion from the Houston Rockets in order to contend for championships, but the Big Three failed to win a title together.

They only played in one playoffs together, and they lost in the Eastern Conference semifinals due to injuries to Harden and Irving. Because to the Beard’s dissatisfaction, they were unable to run it this year.

He was later traded to the Philadelphia 76ers, while Ben Simmons moved to the Brooklyn Nets. It was only 13 months ago that he fought his way out of the Houston Rockets in order to join Durant and Irving in Brooklyn.

James is said to have informed KD that he intends to re-sign with the Nets.

The Brooklyn Nets’ Kevin Durant (left) and James Harden during a game against the New Orleans Pelicans on Nov. 12, 2021. | Getty Images/Jonathan Bachman

The Nets wanted to win championships with the Big Three, but James Harden’s uncertain future hung over them like a black cloud.

For the 2022-23 season, Harden’s contract includes a player option. So, if he wants, he can opt out and become an unrestricted free agent this July. If he had remained with the Nets, he would have had the same chance.

As a result, Brooklyn’s championship window was approaching its end.

Harden, on the other hand, allegedly informed Durant that he intended to sign a contract extension with the organization.

During Harden’s time with the Nets, “Durant’s connection with Harden started to flourish anew,” according to Logan Murdock of The Ringer. “According to league sources, they went on a vacation to Greece this past summer, and the guard convinced Durant twice that he’d sign an extension to remain in Brooklyn long term.”

That contract extension was never signed by Harden. Instead, he pushed his way into the 76ers’ organization.

James Harden’s commitment to the 76ers should alarm Joel Embiid.

It’s not simple to win a title. With the Rockets, James Harden learned this. During his nine seasons in Houston, he never won a championship.

As a result, no one could blame him for wanting to go. For over a decade, he gave it all he had.

But, since then, where has that devotion gone?

Harden, Kevin Durant, and Kyrie Irving worked together to earn a ring. Harden was most likely in it for the long run, according to KD and Irving. But as soon as things were difficult, he wanted gone.

So, if Harden and Joel Embiid don’t win a championship, what would they do?

Embiid has previously dealt with a terrific teammate, Ben Simmons, who isn’t all-in. He may have to deal with Harden again if he can’t work things out this season.

Also, don’t forget about the player choice. Harden has said that he intends to opt-in (which would be the most financially advantageous option), but the guard is claimed to have informed Durant that he meant to sign an extension in Brooklyn but did not. At this point, how reliable is his word?

Overall, James Harden and Joel Embiid have as good a shot to win the NBA title as anybody. Embiid, on the other hand, should be worried about Harden’s future in Philly if they don’t.