Kenny Pickett was a high schooler, and he had the opportunity to meet one of his football heroes: Peyton Manning. This meeting led to an advice that helped Kenny’s NFL Draft stock skyrocket over the next few years. 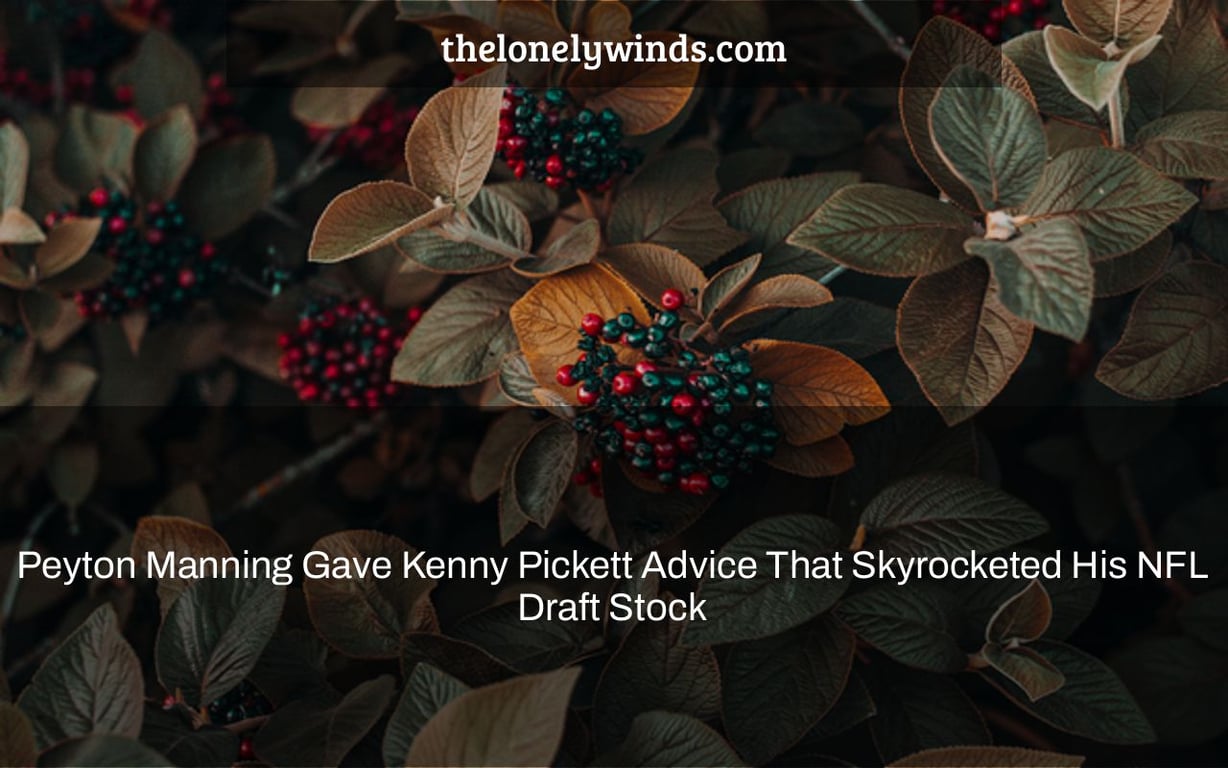 Kenny Pickett has been one of the most talked-about prospects at the NFL Scouting Combine in Indianapolis. He didn’t fully break into the spotlight until his fifth season at the University of Pittsburgh. The extraordinary season may not have occurred if it weren’t for Peyton Manning.

Pickett clearly remembers discussing the possibility of declaring for the NFL draft after the 2020 season with the Hall of Fame quarterback. The topics they discussed lead to the Oakhurst, New Jersey native becoming one of college football’s finest quarterbacks.

Kenny Pickett attended Pitt for his entire collegiate football career. He only appeared in four games as a freshman, but in 2018 he took over as the main quarterback. Under head coach Pat Narduzzi, he had three strong seasons.

Pickett passed for 2,408 yards, 13 touchdowns, and nine interceptions in the 2020 season, completing 61.1 percent of his passes.

The Panthers quarterback deliberated long and hard before declaring for the NFL Draft in 2021. Trevor Lawrence, Justin Fields, Zach Wilson, Mac Jones, and Trey Lance were among the top players in the class.

As he considered his choices, Pickett sought advice from famous quarterback Peyton Manning. During his junior season at Tennessee, the future Indianapolis Colts and Denver Broncos star encountered a similar circumstance. Ultimately, the talk aided the NFL draft hopeful in making a choice.

“Peyton offered me a lot of knowledge that helped me make that choice to come back to Pitt after that 2020 year,” Pickett told The Athletic’s Nick Cosmider. “Returning to school was the finest move I could have made.” I’m obviously in a better position this year than I would have been last year if I had chosen to come out. I owe him a debt of gratitude for all of his guidance.”

The draft status of the Heisman Trophy finalist soared.

Since 2014, the most throwing touchdowns against the blitz in a season.

Kenny Pickett, a fifth-year senior, benefited much from Peyton Manning’s counsel. He swept the college football world off his feet and hasn’t looked back since.

The Pitt star had his most fruitful season as a member of the Panthers. In 2021, he completed 67.2 percent of his throws for 4,319 yards, 42 touchdowns, and seven interceptions. Pickett was fourth in the NFL in passing touchdowns, completions, and yards. On the rush, he totaled 233 yards and five touchdowns.

The 23-year-old quarterback earned All-American accolades after leading Pitt to an ACC title. Pickett was also named ACC Offensive Player of the Year and a Heisman Trophy contender.

Returning to Pittsburgh for his fifth year of eligibility was the smartest option the young quarterback could have made. He wouldn’t have performed well in the draft given how strong the 2021 quarterback class was. Now he can brag about great statistics and memorable experiences on his résumé.

Although it’s unknown where Kenny Pickett will go in the draft, Peyton Manning’s sound counsel helped him get there.

In the NFL Draft of 2022, where will Pickett be selected?

The mock draft season has begun. The NFL Draft will take place on April 28-30, 2022, and speculation is rife about where some of the best talents will end up.

Several clubs are in need of quarterbacks and might be interested in Kenny Pickett in the draft. The Denver Broncos, Pittsburgh Steelers, Carolina Panthers, New Orleans Saints, and Washington Commanders are all looking for a starting quarterback.

Pickett is expected to go No. 11 overall to the Commanders, according to ESPN draft experts Mel Kiper Jr. and Todd McShay. Meanwhile, NFL Network’s Daniel Jeremiah predicts that the Panthers’ star will be traded to the New Orleans Saints at No. 18.

This group of quarterbacks does not have a lot of fans. Pickett, Malik Willis, Desmond Ridder, and Matt Corral are among the players that have shown promise. Teams must address the situation, and players will be given the chance to demonstrate their value.

Peyton Manning has undoubtedly talked to Broncos personnel about Kenny Pickett. If they don’t get a big name in the trade market, GM George Paton could consider drafting the Pitt quarterback.

Pickett remarked, “I’d be incredibly delighted to play there.” Whether it’s in Denver or elsewhere, the expected first-round pick looks to be ready for the challenge.

Colin Cowherd names the one quarterback he’d choose first overall in the NFL Draft: ‘An Absolute Home Run at the Combine,’ he says.

How To Fix Elden Ring Not Launching