Zigbee is a wireless communication protocol that allows devices to communicate with each other in short distances and without relying on the internet. Characteristics of ZigBee include: low power consumption, energy efficiency, interoperability between different systems

Zigbee is a wireless mesh networking technology that uses the 802.15.4 or 802.15.4g standard to allow devices to communicate with each other, and is primarily used in applications such as smart lighting and home automation. Zigbee also has many characteristics that make it unique compared to other standards, such as being self-organizing and packet-based rather than frame-based like Wi-Fi, using a star topology rather than a tree topology like Bluetooth, having no central coordinator or access point, and being able to work without a network administrator. 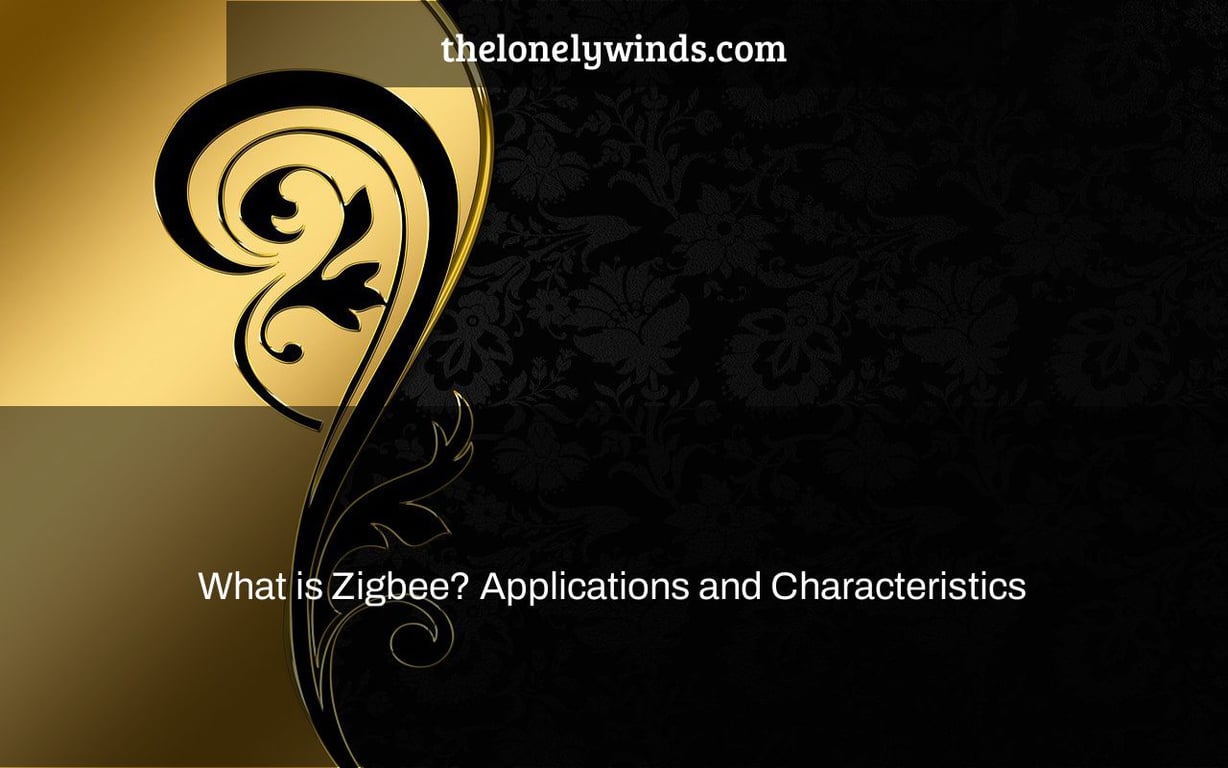 What exactly is Zigbee? and how does it work?

Do you want to use a network structure that is flexible, has a long battery life, and is simple to set up?

To begin, let us ask a question: what is Zigbee? Zigbee is a wireless technology standard that defines a series of limited-range communication protocols.

IoT networks based on Zigbee are low-cost and low-power. Zigbee uses the IEEE 802.15.4 physical radio standard, as well as unlicensed bands.

Why Is Zigbee Technology Necessary?

Why do we need another short-range communication standard when we already have Wifi and Bluetooth? The Zigbee standard, on the other hand, is for control and sensor networks.

Because Wi-Fi and Bluetooth are not ideal for this kind of wireless connection, the goal is to monitor and control devices.

So, what is Zigbee’s standard addressing? Zigbee is a short-range wireless communication standard that tackles the demand for extremely low-cost implementation of low-power devices with low data rates.

It is one of the most widely used Internet of Things standards (IoT).

Zigbee is an open-source standard established by the Zigbee Alliance, a non-profit organization founded in 2002 that currently has hundreds of users.

A home automation controller with a software program that controls devices in Zigbee Home Automation.

A central hub, or simply a hub, is another name for the controller. The gateway serves as a connection between the Zigbee network and the internet.

The gateway links to the internet, allowing the owner of the home to operate smart home gadgets from anywhere on the planet. The Zigbee protocol may be used to control the following smart home devices: 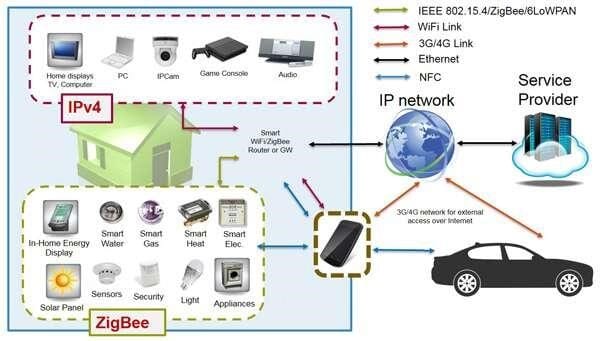 Because the switches are battery driven, they are not linked to any electrical cable in the diagram. Switching the plugs on and off sends a signal to the controller, indicating whether the relevant device should be turned off or on.

The Remote Monitoring System is another intriguing Zigbee network application. A patient might be wearing Zigbee sensors that capture data such as blood pressure, heart rate, and body temperature.

This data will be relayed over the internet to a hospital computer through the Zigbee gateway, allowing a physician or nurse to keep track of the patient’s health. 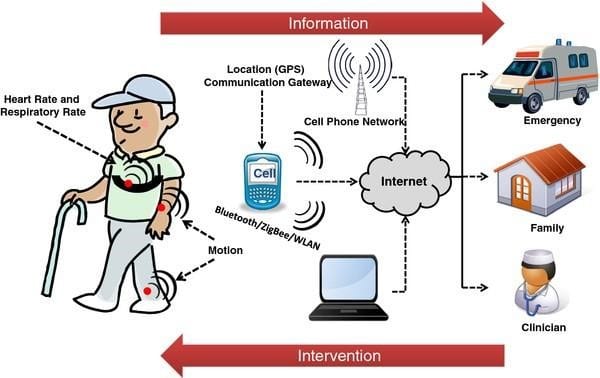 What is Zigbee and how does it relate to medical data?

Why can’t we simply utilize Wi-Fi or Bluetooth technology for these gadgets, you may wonder? For battery-powered devices or equipment that need minimal power consumption, such as sensors, WiFi consumes a lot of energy.

Bluetooth will also be incompatible since the Bluetooth network can only handle 7 devices at a time, but Zigbee can support 100.

Devices may be linked to the router with lower data expenses and reduced power usage using Zigbee technology. It also gathers all necessary data and conducts control activities inside a building.

Industrial control systems are one of the Zigbee technology’s applications.

Characteristics of the Zigbee Standard in General:

Devices and Networks Compatible with Zigbee:

Zigbee is the first coordinator. The Coordinator gadget is the most powerful. The network is started by this device. Because each network has only one coordinator, it is the network’s root. The coordinator is responsible for a variety of responsibilities, including:

What is Zigbee and What Are the Different Types of Zigbee Devices and Networks?

2. Routers — Between the coordinator and the end devices, Zigbee routers serve as initial nodes.

This results in traffic being routed between multiple nodes. They also receive and save communications addressed to their kids. Other routers and end devices may connect to the network via routers.

3. End Device – The Zigbee end device only holds enough data to communicate with the parent node.

End devices can sleep (standby), making them good candidates for battery-operated devices. All communication destined for a certain end device is routed via its parent. Any pending messages are requested by the end device from its parent.

What exactly is ZIgbee? – Topologies of Zigbee Networks

1. Topology of the stars

Because all devices will have to share this one channel to communicate, the coordinator allocates just one channel to the network. There are two ways to get access to a channel:

1. A method based on expectations

Step 1: Make certain you have a hub.

Step 2: Choose your devices. Consider the size of the space. The gadget should be within 10-20 meters when utilizing Zigbee. If your gadgets aren’t too close together, the Zigbee range should suffice.

In a Zigbee mesh network, it employs a series of extender devices that operate as routers.

If your rooms are large, you’ll want home technology like Z-Wave that has a greater direct range.

Step 4: Connect devices and plug them in.

Zigbee is the most advanced, powerful, and cost-effective home technology available. Zigbee is a low-power wireless technology that only utilizes data when it is needed. It provides a lot of benefits over Bluetooth.

Because it uses less energy than Wi-Fi, it has the longest battery life.

Smart Light Bulb of the Year

What is the definition of smart lighting?

How to Get Google Home Mini to Work

Zigbee is a wireless mesh networking technology that was developed by the IEEE in 2005. Zigbee operates on the 2.4 GHz frequency band and uses direct-sequence spread spectrum (DSSS) to send data over radio waves. The devices communicate using a mesh network topology. Zigbee’s primary application is home automation, but it can also be used for industrial control systems and other purposes. Reference: zigbee topology.

What is Zigbee and its applications?

A: Zigbee is a wireless technology that can be used for various purposes, such as smart home or industrial automation.

Which of the following are the Zigbee application?

A: Zigbee is a communications protocol that uses radio waves to transmit data wirelessly with low power consumption. It was originally developed by Philips Electronics in the early 2000s, and became publicly available on July 2003.

What is Zigbee technology discuss in detail about Zigbee architecture and its application areas?

What Is The Secret Of The Popularity Of Essay Writing Services In The USA? [2021]